skip to main | skip to sidebar

Thoughts On Carrying a Firearm in the Aftermath of the Orlando Terrorist Attack.

This post is off the rails of the intention of this Blog and has nothing to do with building a Black Rifle.  It does, however, have everything to do with the idea of using a Black Rifle, or a smaller tool for remote application of heavy metals, for it's original designed purpose: to eliminate the threat from the most prevalent and dangerous of predators.  It was written originally in response to a discussion on carrying a firearm for the purpose of self protection. Unfortunately, in my opinion, the respondents had an unclear view of what exactly that meant.  The picture below started the discussion: 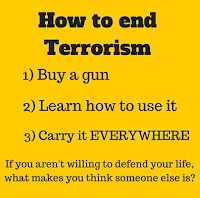 
Unfortunately an individual that wasn't necessarily anti-2A but not a gun owner chimed in and expressed his concern with the general premise.  Not that he is against people carrying, but he is not comfortable with buying a gun and carrying it without the knowledge of how to use it.  Similar thought to someone stating that the only way to be safe in an airplane is to buy a parachute and wear it when you are in a plane - without the training on how to use said parachute.
The disturbing element was when a firearms instructor chimed in and made the statement that handguns are not all that dangerous and that 80% of the body is non-vital, therefore you don't have to be the first shooter in a situation - with the implication that one can absorb bullets from an aggressor and still respond in kind to end the fight....  My reply to the situation is as follows:

******, if the premise of carrying a gun was to kill someone your thought process is right on. However, if you adopt the philosophy that a firearm is merely a highly efficient tool used to end a threat to your (or an innocent's) life, the connection is much easier. HOWEVER, one does not simply strap a gun to one's hip (or wherever) and suddenly become a defender of the masses. There is an enormous responsibility one must understand and embrace when one decides to carry a firearm (with great power comes great responsibility), AND thoughtful and serious education and continual training must be committed to. I am somewhat disturbed by the comments by ******** (a firearms instructor) that portend (at least appear to) the thought of someone using a firearm defensively to "wound" (if I misconstrued your comments ******* I apologize). No legitimate training teaches the use of a firearm to accomplish any mission other than to stop the threat. To do that, you visit harm on the threat until that threat is no longer functioning as a threat. This action can be as slight as exuding a non-victim presence to the extreme of introducing a volume of heavy metals into the circulatory and neurologic centers of the threat sufficient to cause said systems to cease to function. NEVER EVER put a weapon on your body or in your hands thinking you will use it to kill unless you also intend to spend the remainder of your life in prison. Finally, understand that "killers" and "terrorists" do not view or value life as you or I do. They are able to disassociate their actions with the weight of life. This is an enormous hurdle that the 'normal' person has to overcome when trying to deal with how to accomplish the action of ending the threat. I cannot begin to explain this concept in a Facebook post (too long already). Tim Larkin's book " How To Survive the Most Critical 5 Seconds of Your Life" does a very good job of illustrating the difference in mindset between predators and their prey and should be read by anyone that wants to enter the discussion of self protection. Sorry for the lengthy post but this is heavy stuff that cannot be understood in Facebook 'sound bites.

I would actually like to hear any feedback anyone has on this topic.  Again, I apologize for the non-build post (not that there are many of those on here), but things being what they are I felt it appropriate.
Posted by budprop at 6:15 PM